I was born towards the end of the World War Two in the home I continued to live in at Great Barr, Warwickshire, England, until I left it in autumn 1968 to study for a degree, initially at Keele University, Staffordshire. Both my father and mother had worked with their hands, he most recently in the car trade and she as head cook of a local nursery school kitchen, until she died in my sixteenth year, age 49. My brother Roy, ten years my senior, says my home birth interrupted his enjoyment of the Tommy Handley radio comedy show that evening, a Thursday. I can’t think his experience was too traumatic, as he was 10 and I had just emerged – but who knows?

When I got to Keele I joined the staff of a contemporary arts magazine called UNIT, and after receiving a reply to a letter I’d written to John Lennon and Yoko Ono for an interview about Revolution, on December 2 (1968) they picked me up along with two other Keele student friends I’d brought along at Weybridge station. We spent the rest of the day talking at John’s house, Kenwood , and recorded two hours of the interview with them on Daniel Wiles’s cassette tape . The other momentous event of my year at Keele (other than photographing a Pink Floyd concert) was to discover the subject of Anthropology by reading a book by Bronislaw Malinowski.

Wanting to study the subject in depth, I applied for a place to study anthropology at Durham University, was accepted, and received my single honours degree in summer 1972. While at Durham, I made some good friends and some of my non-curricular activities included: writing, performing & publishing some poems, co-running the film society, co-founding the Buddhist Society, editing the Arts pages of the University newspaper Palatinate for a year; learning (some of) the Martha Graham dance method from an inspiring teacher with five others, this culminating in a successful performance piece; having my father and brother visit me, and proudly showing them the sights of beautiful Durham City.

After Durham, I went to London and shared a flat with a friend I had made at the university,  Peter Barham. Before long he joined the staff of the Tavistock Institute. I taught in a Prep school for a couple of months (awful), was a mini-cab driver for another few months (both baffling and at times hair-raising) , then my degree got me a social worker post in East Ham. This was involving but not intellectually stimulating, so when a year later I got the chance to live in and look after a large stone house on the side of a valley in mid-Wales, I went for it. In this wonderful location, I made local friends and learned hen husbandry and gardening. When a South African painter émigré and his talented flautist girlfriend arrived, it now felt like a little artist community of sorts. At Durham, as well as reading much English literature, the anthropology had led me into a formal interest in myth, which now moved to plan out a book called Dracula’s Magic, completed much later, in 1983. Still as yet unpublished, it nevertheless secured my first publishing contract, to put together the Penguin Classics edition of Mary Shelley’s Frankenstein (1985), now in its third incarnation. In mid-1975, my Dad suffered a stroke at Great Barr. I rushed home and visited him in hospital for some weeks, but he died in July. With little incentive for me to seriously reconnect with the Midlands, I returned to London in autumn 1976, and stayed.

My Welsh sojourn had helped me to decide on a career: Paulo Freire’s Pedagogy of the Oppressed set me thinking hard about working in adult education. Starting with some part-time appointments, by 1981 I had become a permanent lecturer in English, initiating a whole range of courses for adults at Tower Hamlets Institute in London’s East End. 1984 is popularly linked with the title of George Orwell’s dystopic novel, but that year for me was an annus mirabilis for new professional opportunities. Besides gaining the Penguin contract, I began teaching for the Open University. Then, awarded a sabbatical year from the Inner London Education Authority (ILEA), I registered for a Ph.D in English at Essex University, with a brilliant supervisor, David Musselwhite. He became a great influence on my work as well as a good friend for a time. I secured the doctorate in 1989 for researching and writing a critical edition of William Godwin’s ‘political gothic’ novel Caleb Williams (1794), the second of my Penguin Critical Classic editions to appear (1988).

By 1989 I had obtained a good foothold as Open University Arts tutor in London, and left the ILEA with a ‘severance’ payment to enter the risky world of ‘free-lance’ work. For the next 7 or 8 years I embraced many kinds of creative activity: I published edited as well as my own scholarly work, wrote journalism and scholarly reviews, taught literature at other universities besides the OU; and perhaps most  interestingly, co-produced with Daniel Wiles over a two-year period programmes I’d devised for Melvyn Bragg’s South Bank Show. But as a lone single parent with my teenage son to care for, I knew by the mid-Nineties that financial security was a priority taking precedence over my inherent need for independence. I was therefore lucky that more substantial (office-based) work came my way by 1998 with the OU Arts Faculty in London. In 2001, I was successfully appointed to a new permanent Arts Faculty Manager post at Camden Town, upgraded to a Senior position by 2004. In October 2010 the corporate-minded OU ‘retired’ me from this post, and I soon after stopped all my teaching, including the Shakespeare course I’d helped to write and support. The experience of working for a large ‘centre-margins’ structured  corporate employer is always bound to have its ups and downs. Luckily, my efforts as tutor and manager with the Open University for me felt more up than down, genuinely fulfilling the aspirations I had conjured up about adult education in 1974 while rambling in deep thought across the Radnorshire hills. This feeling of satisfaction owed little or nothing to the effects of top-down organizational structures, but from the experience of working positively with students and colleagues.

Luckily, a project I conceived and put together in 2010 concerning the sixteenth and seventeenth century theatres of London that I called Shakespearean London Theatres (ShaLT), with vital support from Professor Andrew Gurr, won ample funding from the Arts and Humanities Research Council in 2011. I had requested theatre historian Gabriel Egan to be Principal Investigator of the project, a collaboration with the V&A’s Theatre & Performance Dept., and by 2013 I’d managed to completion all of its ‘outputs’, the key one being an informative two-sided map of the 21+ playhouses which delivered English renaissance drama to London’s expanding population over what Andy Gurr has dubbed the ‘Shakespearean’ theatrical period, 1575-1642. The ‘early modern’ element of my work efforts are for the moment channeled through my role as an active Trustee of The Rose Playhouse, London’s first Tudor theatre on Bankside.

Enough for now. I have said virtually nothing here about my personal life, preferring to concentrate on my work and its public outputs. For my current purposes, that is as it should be. When time permits, I should like to write an autobiography. But right now ‘writing’ means bringing to completion and publication the work I have called Singing His Heart and Speaking His Mind: The Songworld of John Lennon. This has been a long-brewing concoction that has not been easy to come at. But as the new year of 2016 changes into Spring, it feels as if the key ingredients are coming together. Like the best wines, I am hoping that this special brew of personal imagination, research and critical explication, when completed and available for public consumption, will prove to be of interest and value. 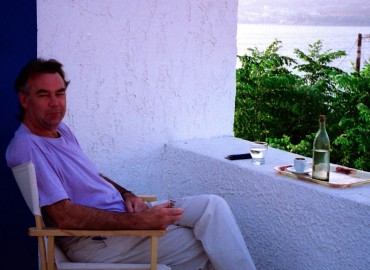