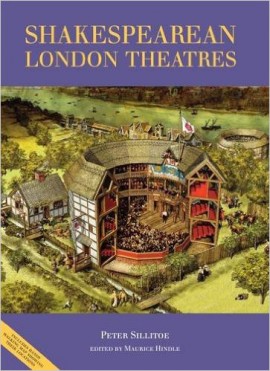 The Guide to Shakespearean London Theatres, by Peter Sillitoe, edited by Maurice Hindle, with a Preface by Andrew Gurr.

This book was one of six ‘outputs’ produced by the AHRC funded Shakespearean London Theatres project (shalt.org.uk) I devised and managed to completion 2011-13. It tells the story of the playhouses, entrepreneurs, audiences, actors and dramatists comprising London’s theatrical industry 1575 to 1642, when Parliament closed all theatres due to the impending strife of civil war. It employs a deftly written narrative beautifully illustrated with colour plates, many sourced from the V&A Museum collection. When the V&A (our project partners) decided not to publish the work, I undertook the task of creating a self-published volume. The heavy lifting of this onerous task fell to me!

Our post-doc assistant Peter Sillitoe drafted out a narrative under my direction, but I had to put it through several drafts and rewrites. Meantime, the brilliant designer Nigel Soper whom Andy and I had hired organised the detailed layout roughed out by me. Once the content was assembled and triple checked, it was passed to production manager Geoff Barlow (like Nigel an old hand at dealing with V&A publications), before a huge number of copies were UK printed. Finally, these were passed on to a distribution company I had sourced before key retailers received copies by April 23 2013, Shakespeare’s birthday! It’s a uniquely useful book shrink-wrapped to hold the free walking map for early London theatres I helped design. Every household interested  in learning about Shakespearean London theatres should have one!